Let me speak to the men.

As a man ages, his hormone levels also drop. Optimal testosterone levels for a man are between 800-1,200 ng/dL, but I see men come into my office every day with levels in the 100s and 200s.

You will notice on the chart below that today, men’s testosterone levels typically decrease as they age. 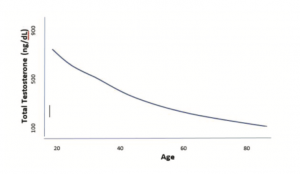 This graph should alert us to the changes happening in our bodies. Something is different, and that difference has dramatic effects.

Think of your body as an engine. In your twenties, that engine was firing away on all eight cylinders. You had energy, focus, concentration, sexual drive, muscle mass, and a great memory. You were a warrior!

However, something started happening in your mid-thirties. At first, the change was almost imperceptible. Soon, you began noticing that you could not do the things you used to. You became irritable and anxious.

Things were different sexually. That once-powerful eight-cylinder engine was now down to three or four cylinders, and you could feel the effects.

The Effects of Low Testosterone in Men

There are many signs and symptoms of testosterone deficiency in men as they age. They may experience one or more of the following symptoms:

Is any of that normal? No. It might be common, but it is not normal. Something is wrong, and we know it. It is not the way our bodies were designed to age. We are meant to live full, passionate, and active lives throughout our forties and beyond.

Unfortunately, there is more to this sad story. I see something at Optimal Bio that I never thought I would. Young men in their late teens and twenties come into my office with testosterone levels dangerously low—in the 100s and sometimes below. Some of these men are returning from serving our country in military service in Afghanistan and Iraq. Others are in college or just starting their careers. They are depressed, lethargic, and sometimes suicidal. They have lost sexual interest and have changed from the warriors they once were into complacent couch potatoes.

However, the beauty of BHRT is that it is effective, regardless of age and no matter what the cause of low testosterone. Men, the good news is you don’t need to dread getting older anymore! You can still be the warriors you were created to belong into your seventies and eighties.

Natural testosterone not only helps a fifty-year-old man feel like he is thirty again, but it also protects his overall health.